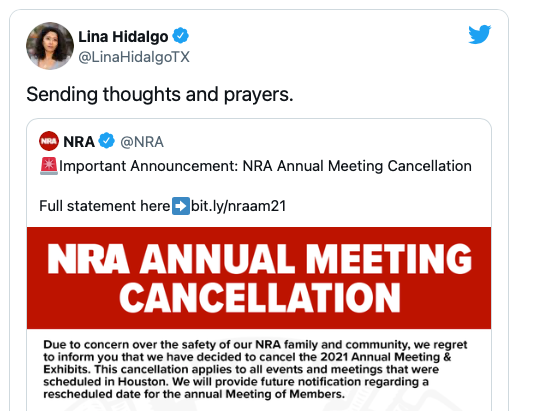 The National Rifle Association on Tuesday announced the cancellation of the organization’s 2021 annual meeting, which was scheduled to take place in Houston next week.

In a statement, the organization wrote that the decision was made after reviewing data regarding COVID-19 in Harris County, which has rapidly spread among the region’s unvaccinated population over the past month due to the highly transmissible delta variant.

According to the NRA, the risk to public safety caused by the pandemic would prevent organizers from offering “the full guest experience.”

“We are mindful that NRA Annual Meeting patrons will return home to family, friends and co-workers from all over the country, so any impacts from the virus could have broader implications,” the statement read.

The cancellation comes as COVID-19 cases continue to increase across the region, effectively overloading the county’s hospital system. As of Tuesday, at least 2,872 COVID patients were hospitalized in Harris County — the highest number of hospitalizations at any point during the pandemic, according to data from the Southeast Texas Regional Advisory Council.

The organization added that a rescheduled date for the meeting will be announced at a later time.

The annual event, set to celebrate the organization’s 150th anniversary this year, was initially scheduled to take place in May at the George R. Brown Convention Center, but pushed back to September due to health concerns caused by pandemic.

The meeting typically brings about 85,000 people from across the country each year and has an average economic impact of $28.9 million from hotel bookings, restaurants and entertainment, according to Houston First Corp, the quasi-governmental organization that manages the George R. Brown Convention Center and conventions in the city of Houston.

The organization had previously told Houston Public Media that it considered the NRA event’s survival “a significant victory for the city’s challenged convention and hospitality industries.”

The cancellation marks a major loss for Houston’s convention industry, which has been slowly recovering since the beginning of the pandemic in March of last year. The 2020 Houston Livestock Show and Rodeo was one of the first events to fall to the pandemic, and was followed by several other Houston events — including this year’s Rodeo.

“We look forward to welcoming the NRA back to Houston for a future annual meeting,” Houston First President and CEO Michael Heckman wrote in an emailed statement. “So far this year, Houston has hosted more than 50 safe and successful meetings and conventions. We look forward to working with meeting professionals and show organizers as the industry continues its rebound. Houston continues to be open for business.”

Last week, Houston’s annual Offshore Technology Conference, which in 2019 attracted more than 59,000 people, took place with a much smaller footprint after some major oil and gas companies pulled out of the event. The OTC for the first time declined to provide attendance numbers, saying it would be an unfair comparison to previous years, according to the Houston Chronicle.

Other major conventions on the calendar in Houston this year include the International Quilt Festival in October and the World Petroleum Council in December.