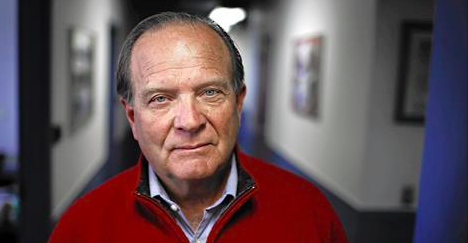 Tom Vanden Berk, who is retiring after decades leading the social services agency UCAN, is seen on June 8, 2016, in front of the organization’s new headquarters on the West Side. (Terrence Antonio James / Chicago Tribune)

He can’t bear to watch the nightly news.

Day after day, the shootings, the killings. Different lives, different deaths and yet it’s somehow always the same story, of guns and anger, tangled up with poverty.

It’s not that he doesn’t care. He cares. Unlike the multitudes who bemoan the violence and do nothing to help, Tom Vanden Berk has spent his life helping.

“I just can’t stand to see the stories over and over,” he said the other day, sitting in a small room in the North Lawndale headquarters of UCAN, the social services agency he has run for 28 years.

I’d come to talk to him because, at 69, he’s about to step off into the role of CEO emeritus and I was curious: In the years he has been helping to solve Chicago’s violence, have things gotten any better?

I met Vanden Berk in 1994, a couple of years after his 15-year-old son, Tom, was killed in an alley outside a Rogers Park party. He’d come to pick up his son that night and found police lights blazing in the street.

“Where’s Tommy?” he asked one of his son’s friends.

“He got shot,” the boy answered.

At the time, Vanden Berk was running what he calls “a little orphanage,” the Uhlich Children’s Home, and it struck him that the kind of kids he was trying to help — kids from troubled neighborhoods and families — were the kind who had barged into the party and started shooting.

His son’s death snapped something new into focus, too: These were kids with absurdly easy access to guns.

In the years since, Vanden Berk has been an ardent local voice for gun restrictions — not a ban, but tight registration laws, pressure on owners and dealers. Meanwhile, the little orphanage has grown into a major Chicago social service agency.

UCAN recently sold its rundown North Side facility for $6.5 million and has almost finished construction of a new campus in North Lawndale, one of the city’s poorest neighborhoods.

“Where else are you going to get two city blocks for $1.9 million?” he asked.

The airy campus, with its metal and glass buildings, is conspicuously fresh in a neighborhood of crumbling brick and fraying wood. It offers housing for young people who have been made wards of the state, along with sports, therapy, mentorships and other programs. It employs a lot of people from the neighborhood.

And all of it is built on one premise: Kids raised in violence are traumatized and trauma can be healed.

Vanden Berk learned early about trauma. He was 10 when his father, a part-time janitor for their church, went out one night to repair a boiler. The boiler exploded. Young Tom, the altar boy, served Mass at the church the next morning, not knowing his father was dead.

In the summer of 1966, while enrolled in a Catholic seminary, he came to work in North Lawndale. The neighborhood could be violent then, too, but in those days, before guns were everywhere, violence came in the less lethal form of bats and chains and knives.

Eventually, he left the seminary and married — he’s white, she was African-American — and one of their kids was Tom.

The number of murders per year in Chicago has dropped, though he wonders how much of that is because medical care is better and fewer people die.

“I think it’s getting worse again,” he said. “I don’t think we’ve come to grips with the kids who are exposed to violence, to trauma.”

There are fewer beds now, he said, for impoverished kids who endure violence and abuse.

Effective gun laws have been stymied by the National Rifle Association.

“They’re bullies,” he said, “and politicians are afraid of them. That’s made progress since the 1990s difficult.”

He added: “If we had the death rate in Highland Park we have in other neighborhoods, we would do something about it.”

That may not sound like a cheerful progress report, but on this day, the sun was bright on the new UCAN buildings. Construction workers were finishing the second one, scheduled for a grand opening in July. The place looked good and North Lawndale looked better for it.

Has anything gotten better? All I know for sure is that without the work of people like Vanden Berk, things would be a whole lot worse.