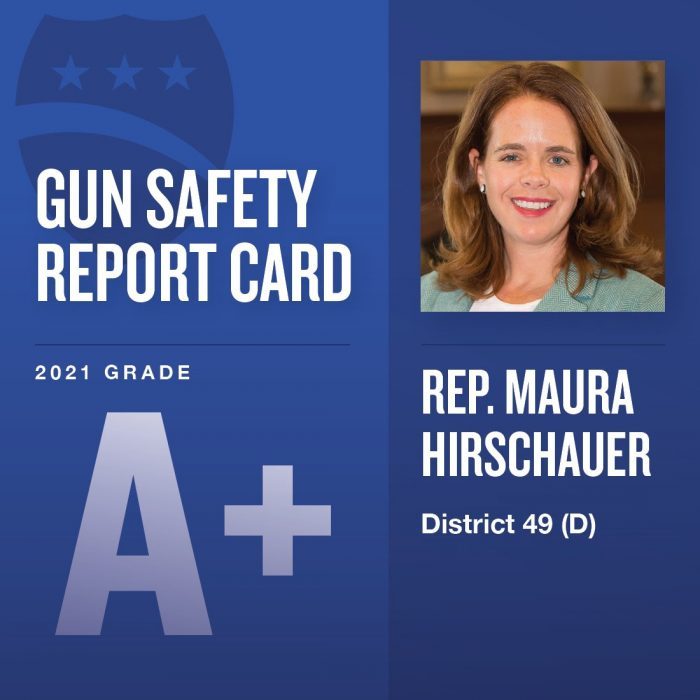 G-PAC was founded to counter the political influence of the gun industry and their lobby in Springfield. To do this, we need champions like state Rep. Maura Hirschauer, who is standing against the corporate gun lobby and actively fighting for policy changes that save lives.Since 2021, Maura has been serving as state representative of the 49th District. She is a mother, activist, community organizer, and former elementary educator. Prior to serving as state representative, Maura was one of the founding members of the Kane and Kendall County chapter of Moms Demand Action for Gun Sense in America.

As a freshman legislator, Maura has made gun violence prevention her top priority. Maura took the bold step of sponsoring and passing a bill out of the House requiring fingerprints for all FOID card applications. This session she has introduced legislation to register existing assault weapons and ban the sale of 50 caliber rifles and their cartridges.These weapons of war have no place in our communities. Her commitment and passion to ending gun violence is just one of the reasons Maura received an A+ on her Gun Safety Report Card.

Maura won’t stop fighting to keep our children, families and communities safe. Now she is leading the charge with Rep. Willis to create a statewide public awareness campaign on safe firearm storage. From 2019 through 2020, the firearm suicide rate more than doubled among Black, Latino, and Asian teenagers, while it increased by 88 percent for Native Americans and 35 percent for white teens. These teens are too young to own guns and most times get access to guns in the home.

Increasing public awareness of gun safety through safe gun storage is a key strategy to reducing gun injuries and death in Illinois. Take one minute to thank Maura for being an A+ gun safety champion.

With your support, we will work to make sure Maura is reelected in November.