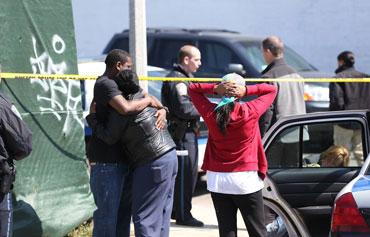 ON SATURDAY, it was Kalamazoo, Mich. A gunman shot six people to death. Police said he randomly selected his victims as they went about the ordinary business of a winter weekend. On Sunday, it was Hazelwood, Mo., where a gunman killed a 37-year-old mother as she rode in her car. And Yazoo City, Miss., where a 25-year-old man in a nightclub was shot in the chest and died. And Merrillville, Ind., where a relative murdered a husband and wife in their 60s and then turned the gun on himself. And near Houston, where a 17-year-old murdered a 25-year-old, apparently a rival in love, and then shot himself in the head.

All that is far from a complete accounting of the people killed or injured in gun violence in the United States over the weekend. So routine are shootings that only the particular horrors of mass shootings like a Kalamazoo or San Bernardino or Charleston attract any national attention — and even then not for long. Kalamazoo’s senseless deaths, sympathy for the families, speculation about what drove the accused gunman — sorry, that’s old news. Time to move on.

After October’s rampage at a community college in Oregon in which a gunman killed 10 people, including himself, and wounded seven others,President Obama lamented that mass killings have become “routine” in the United States. “I hope and pray that I don’t have to come out again during my tenure as president to offer my condolences to families in these circumstances. But based on my experience as president, I can’t guarantee that,” Mr. Obama said.

The United States loses far more people to gun violence — homicidal, suicidal, accidental — than almost any other country, and there is one reason: the easy availability of guns. Other countries struggle with mental illness. In other countries, teenagers play violent video games. Uber does or does not perform adequate background checks in other countries, the particular distraction of the Kalamazoo case. Those may be interesting issues. But it is guns that make the difference.

So far in this very young year, according to the nonprofit Gun Violence Archive, there have been 6,886 incidents of gun violence in the United States, killing 1,781 people and injuring 3,475, as of Monday afternoon. Of those killed or injured, 74 were under age 12.

We hope that voters keep those numbers in mind when they make decisions this year about who should represent them in public office.