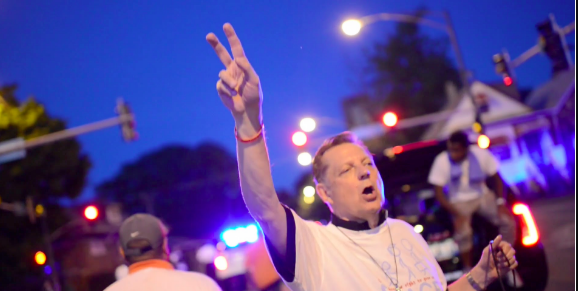 The Gun Violence Prevention PAC is proud to honor Father Michael Pfleger with the 2016 Paper Tiger Award. Losing his own son to gun violence, Father Mike is passionate about reducing gun violence and saving lives. Below is a glimpse at some of his work on the streets where the violence takes place every day:

CHICAGO — Outside the rectory of Saint Sabina’s, a Catholic church on Chicago’s South Side, a crowd gathers to begin their usual Friday night walk to their neighborhood’s most afflicted regions.

They are led in prayer by a man wearing a turquoise short-sleeved button down shirt instead of the traditional Roman collar. And on top of that, another t-shirt, which reads: “Our Children Have the Right to Grow Up.” …

In a year when the city of Chicago is seeing its highest number of gun fatalities on record, Pfleger’s army of parishioners and community activists are simply taking matters into their own hands.

For more than 40 years, Pfleger — known by his parishioners as Father Mike — has served as pastor of the faith community of Saint Sabina’s, out-serving three of the last cardinals who’ve headed up the Chicago Archdiocese and surviving several suspensions from priestly ministry.

But in all of his years serving Saint Sabina’s, the largest African-American Catholic church in Chicago, Father Pfleger said this year is hands down the worst he’s ever seen violence in the city of Chicago.

“Our children live in war zones, so if they’re not processing that, it either has them living in fear or being overwhelmed or living in denial.”

The shootings in Chicago have reached such a high point that even schools are trying to figure out ways to intervene. …

Pfleger adopted three sons against the wishes of the Chicago Archdiocese. Jarvis Franklin was one of Pfleger’s sons, but was killed in gang crossfire. He was just one month shy of his 18th birthday.

The loss of Jarvis was strong enough to paralyze Pfleger. But in some way, it provided strength for him to carry on marching and even saying funeral masses in one of Chicago’s most deadliest years on record.

“I just really told God this is going to be my passion,” he said. “To try to save other lives.”

Click on video below to see Father Mike in action.