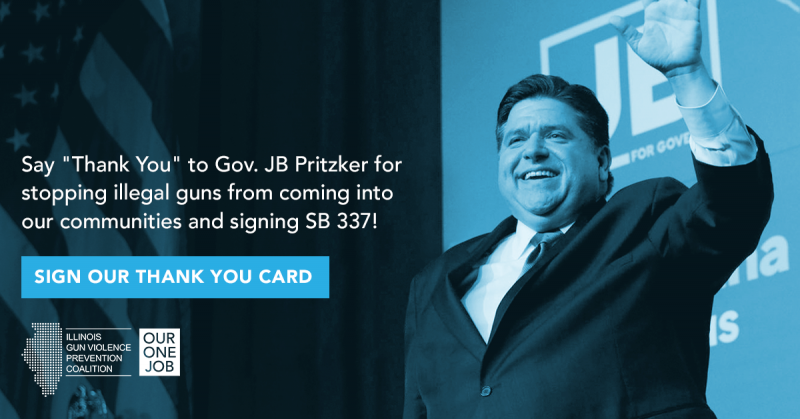 Sixteen years ago, a new state senator was sworn into office, and he made it a priority to keep our children, families and communities safe from gun violence. That year, he filed a bill to license Illinois gun dealers in order to hold corrupt dealers accountable and curb the flow of illegal guns into our communities. Year after year, crime guns sourced back to Illinois gun shops ended up in the hands of people seeking to do harm, and our children and families paid the tragic price.

Despite many obstacles, including outrageous intimidation by the gun lobby, he continued to file the bill each year. That state senator was Senator Don Harmon, and today, he watched Governor JB Pritzker sign into law SB 337, the Combating Illegal Gun Trafficking Act, as one of his first official acts in office. With that signature, families of victims killed by illegally obtained guns can find peace of mind knowing that lives will be saved by SB 337 becoming the law of the land in Illinois.

We are thrilled that Governor Pritzker fulfilled his promise to protect children and families in Illinois from gun violence by signing SB 337 into law. Members of the Illinois Gun Violence Prevention Coalition, especially the parents who have found the strength to turn their unimaginable grief into action, worked tirelessly to fight for its passage, and we are grateful to our legislators from both sides of the aisle who came together in support of this effort, most notably our bill sponsors Sen. Don Harmon and State Representative Kathleen Willis.

In 2015, as a result of the increasing number of people being killed by gun violence, G-PAC and our partner Giffords joined forces with a broad, statewide, bi-partisan coalition of organizations, advocates and elected officials around a common goal: to help rid Illinois of hundreds of illegal guns that end up on our streets each year and in the hands of those looking to do harm. Today, survivors and advocates filled the room to see the the governor take action to stop access to those illegal guns.

Let’s take a minute today to let this victory for safer communities sink in and to thank those who made it happen. Thank you. You made the calls, you wrote the emails, you went to visit your lawmakers and gratefully, you supplied the financial resources to support this 3 year campaign. You stayed in the game and kept your eye on the prize, and Illinois families will be safer because you did.

Click here to watch video and send a thank you note to Governor Pritzker.

There is more work to do to to reduce gun violence in Illinois, and we will be here to take the lead.