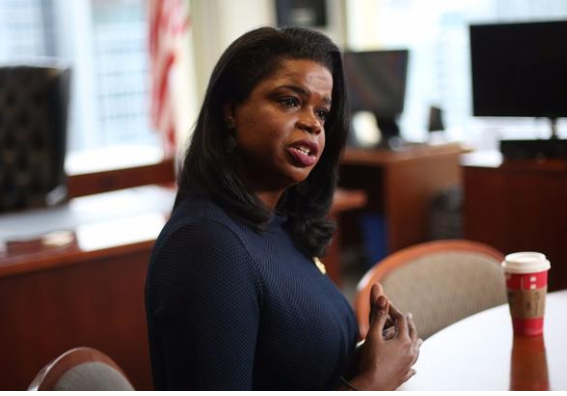 “This city is awash in guns, and we seem to accept that as a truth that people cannot change,” she said.

That apathy can extend to attitudes toward mass shootings, she said, such as the Sunday night attack in Las Vegas that killed at least 59 people and wounded more than 500.

“Every time something like this happens, there’s (a feeling of) ‘there’s only so much we can do, there’s only so far we can go,’ ” she said. “But when we talk about common sense things like licensing of gun dealers here in this state, there is absolutely something that we can do, and the onus and responsibility is on us to beat that drum as much as we can.”

In calling for gun dealers to be licensed at the state level, Foxx noted that many straw gun purchases are made not by sophisticated, large-scale gun-running operations but by individual buyers who legally purchase just a few weapons at a time to sell on the street.
Drawing on her experience as a prosecutor in the Cook County juvenile system, Foxx said investigators can do more to uncover the source of guns recovered on the street.

“Rarely … did we ask the question, ‘Where did you get this gun?’ ” she said. “(It’s) important we start holding accountable the adults who are putting guns in the hands of our children.”

…
“We are all accountable for our criminal justice system failures,” she said. “It is those failures that have led people in some neighborhoods to accept violence as a way of life, the natural endpoint of our chronic failure to invest in people through investments in schools, jobs, infrastructure, you name it.”

Foxx won election last year as a reform candidate, unseating incumbent Anita Alvarez in the Democratic primary with promises of sweeping change. Her office has called for reforming the cash bond system and moved to de-prioritize certain nonviolent crimes such as shoplifting.